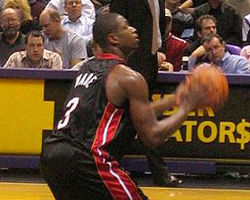 Here’s the thing about being “the most hated team in America.” It usually means you are also the most liked team in America. In pro-sports anyhow.  You can’t really get to the big hate unless you have the big love. The reason you are hearing all this stuff about Miami being a marked team now, how every arena will boo them, how LeBron has dropped off the charts of popularity – is precisely because so many people are also wild-crazy-nuts about the new roster in South Beach. The Dallas Cowboys are the same way: you love them or hate them, but you watch them.

Have you ever wondered how when an athlete shows up high on the least popular list, he often also shows up high on the most popular list. Kobe Bryant is a case in point. He’s way up there on the “ugh I cant stand him scale,” but his jersey is also maybe the most popular one sold ON THE PLANET. How can people love and loathe somebody so much at the same time? Well, that’s what entertainment is, isn’t it? We want our emotions strummed. We like the story of the evil guy almost as much as the hero. A story without villains is as boring as one without champions.

Lebron/Wade/Bosh will have as many people privately pulling for them to pull off a championship as they will have people screaming for them to fail. They call that popularity. Think ahout it. Didn’t the most popular kid in high school also have the most detractors? Goes hand in hand. It may be fun all NBA season to root for LeBron and Co. to fall on their faces, but there will be no shortage of people cheering when and if they hoist that trophy.