Well, you can say it didn’t tarnish his legacy, but you tell me: Brett Favre finished last year one bad pass from a Super Bowl. He was still cheered, marveled at, called a legend, a superstar, he had hosannas tossed at his feet. He left the NFC championship a bloodied warrior, a gunslinger, a guy who, at an age when most ex-NFL quarterbacks have a beer gut and a car dealership, almost got one more brass ring. 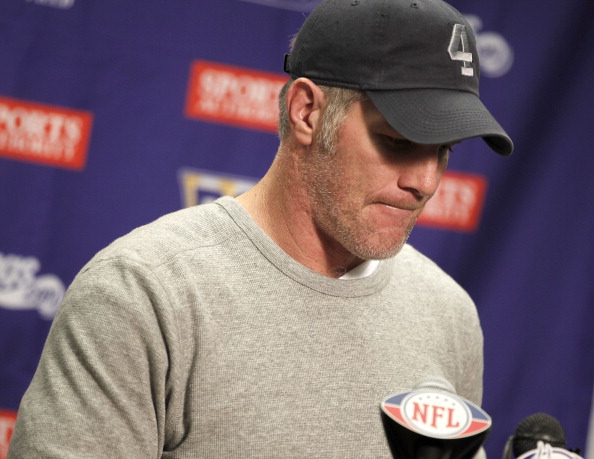 DETROIT, MI - JANUARY 02: Brett Favre #4 of the Minnesota Vikings talks at a post game press conference after a 13-20 loss to the Detroit Lions at Ford Field on January 2, 2011 in Detroit, Michigan. (Photo by Gregory Shamus/Getty Images)

Compare that to Sunday, when Favre left the field in a t-shirt, having not played in three weeks. His team missed the playoffs. It just lost to the LIONS! And the only news he made all week was a $50,000 fine for not being forthright about whether he sent photos of his private parts to a female reporter.

Again, you tell me: is his legacy tarnished?

How could it not be?

The only people insisting it is impervious are the ex-jocks who populate the pre-game shows. And of course they say it doesn’t lose its luster, because they want the same to be true of them. They want the world to remember them at their finest (Mike Ditka, for example, as a Super Bowl champ, not as the dunce who traded his entire draft for Ricky Williams.)

But hero-making is a tricky business. Favre had a chance to step off the stage as a gallant fighter. Instead, he was wooed back like a diva, and the year went south on him from the very start.

He ends with no parade, no 21-gun salute, no standing ovation from a loving home town, He ends instead with a losing record, no playoffs, having gotten a second coach fired in three years, and – oh yeah – that $50,000 fine over his privates. The only way his legacy isn’t tarnished is when enough time passes for everyone to forget his present and remember only his past.

Sadly, for Favre, that’s going to take a while.