So what did we learn from New Year’s Day besides not to mix beer with gin, vodka or Mexican food? We learned that once again, you can talk all you want about the Big Ten getting faster, it is still a mud conference compared to the stardust of the SEC. 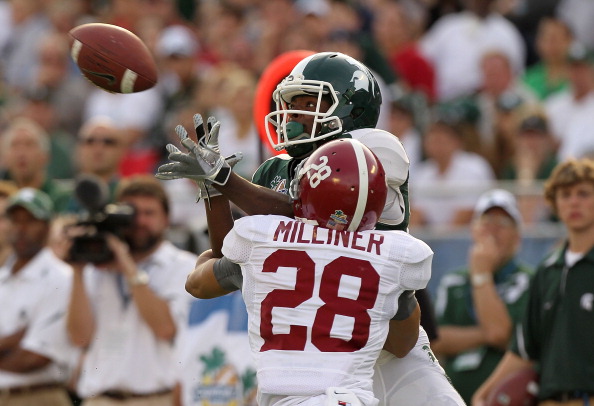 ORLANDO, FL - JANUARY 01: Keshawn Martin #82 of the Michigan State Spartans has a pass broken up by DeMarcus Milliner #28 of the Alabama Crimson Tide during the Capitol One Bowl at the Florida Citrus Bowl on January 1, 2011 in Orlando, Florida. (Photo by Mike Ehrmann/Getty Images)

The teams from the hot and muggy areas of the country made Michigan State and Michigan look ridiculous. OK. Michigan we can understand. Not a very good team. But at least the Wolverines score a lot. That is until the played Mississippi State. U-M managed 14 points, mostly because they were busy gaping at how easily MSU ran up 52 points the other way. So much for U-M’s pinball offense. This was beyond a blow out. It was flat-out embarrassment. Many argued Michigan didn’t deserve a New Year’s Day bowl. The way Rich Rodriguez’s kids played, they didn’t deserve a morning slot on Valentine’s Day.

A bigger shocker was Michigan State. Supposedly a national championship hopeful, Mark D’Antonio’s squad was equally exposed against defending national champion Alabama. The 49-7 score could have been a lot worse if Nick Saban didn’t have a soft spot for Coach D, his old staff member. The Spartans couldn’t get off the field fast enough.

With Penn State dropping to Florida and Wisconsin falling short to TCU, New Year’s Day might have sent more Big Ten recruits heading south than a snowstorm and a thesis assignment.

I’ve said it before. There’s a different football going on in the SEC. You can see it during the season. And I’m sorry, no matter what D’Antonio says about the Spartans not having their best day, you play that game 10 more times, and the tide will roll in nine of them. As for Michigan? I’m not sure the Wolverines could beat in anyone right now. Unless the game ended before they had to play defense.