First of all, a big thank you to the Pittsburgh Steelers for squashing the evil empire and saving us from two more weeks of the New York Jets. That circus has run its course. It was nice to see Bart Scott shut up and Antonio Cromartie humbled and Rex Ryan throwing his headphones in disgust. The J-E-T-S painted a big target on themselves all season long; they can’t be surprised when fans are happy with a bullseye. 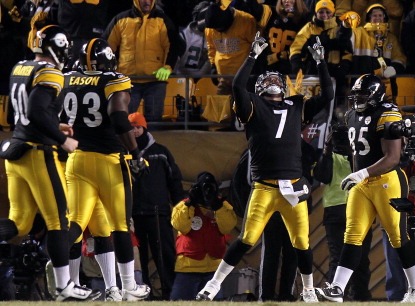 And the Steelers, in the first half, truly did hit that bullseye. Pittsburgh swallowed the Jets vaunted rushing attack, and made Mark Sanchez look a lot younger than he’d looked in previous weeks. So why was it so close? Why were people still biting their fingernails in the closing minutes? Because one of the problems when you rack up an early 24 point lead is that it’s hard to sustain intensity. I thought the Steelers really put themselves in peril with that safety in their own end zone midway through the fourth quarter, after the Jets had run 17 plays and come away with nothing. One good long drive there and the game is over, even if the Steelers don’t score.

Instead, Ben Roehtlisberger couldn’t get the snap from his back up center, and the Jets had two points, the ball, and new life. They came back on the field ready to believe their own hype.

Fortunately (at least if, like most of America, you cant stand the Jets) the Steelers didn’t go into a shell on their final possession. With a third and six, the safe thing to do is run the ball, run the clock, and punt if you don’t make it.

I’m glad the Steelers didn’t go safe. Instead, Roethelsburger rolled out, got chased, still found Antonio Brown – which is what Roehtlisberger does – and instead of hoping the Jets don’t drive downfield for a winning score, al the Steelers had to do at that point was take a knee.

And that’s what puts Pittsburgh back in the super bowl – again. For all the talk about New England, and all the pre-season hype about the Dallas Cowboys, people seem to forget that Pittsburgh is far and away the reigning royalty in toady’s NFL. This will be Roethlisberger’s third Super Bowl in six years. Brady hasn’t been there since 2004.

Of course, hatred of the Jets blinds many people to the fact that they were rooting for a guy twice accused of sexual assault.

But this is the NFL. You pick your poisons. The Steelers earned this trip. And which would you rather have for the next two weeks? A contrite, formerly priggish quarterback, or Bart Scott mouthing off every two minutes?