Good game. Not great. Too many mistakes for that. When defenses are as good as those, handing over seven points on one turnover (Big Ben’s first terrible pick) and changing the fourth quarter momentum on another (Rashard Mendenhall’s fumble) is too much. Even a team as good as the Steelers can’t beat that.
Still, nice to see Aaron Rogers and Charles Woodson and Donald Driver rewarded (although Driver, after the game, said this proved he was one of the greatest players of all time, a large claim for a guy who missed most of the game with an injury.) The thing about the Packers is that they are set up well for the future. Largely young, the Pack has no reason to expect success next year as well. And if they ever get a running game, you better duck. 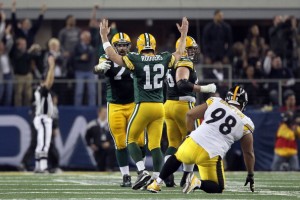 ARLINGTON, TX - FEBRUARY 06: Aaron Rodgers #12 of the Green Bay Packers celebrates late in the game against the Pittsburgh Steelers during Super Bowl XLV at Cowboys Stadium on February 6, 2011 in Arlington, Texas. (Photo by Al Bello/Getty Images)