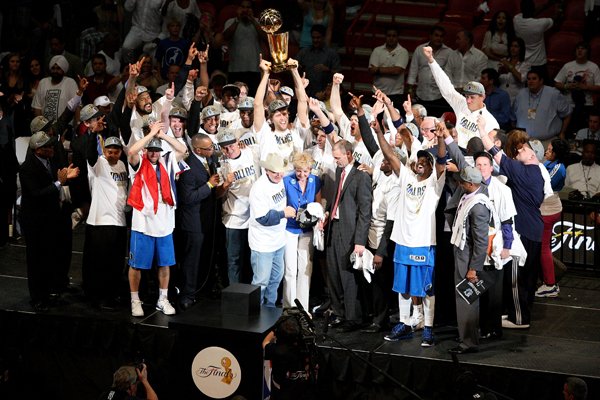 MIAMI, FL - JUNE 12: Dirk Nowitzki #41 of the Dallas Mavericks holds up the Larry O'Brien trophy as he celebrates with his teamates and team owner Mark Cuban aftre the Mavericks won 105-95 against the Miami Heat in Game Six of the 2011 NBA Finals at American Airlines Arena on June 12, 2011 in Miami, Florida. (Photo by Chris Chambers/Getty Images)

It feels more like glee at defeat than joy of victory. I’m talking about Dallas’ six game win over Miami for the NBA crown. Even in defeat, the Heat are grabbing the headlines. But the wrong ones.

You can almost hear the nation high-five slapping each other now that Lebron, Wade and Bosh have been shot down. Why is there such happiness at their comeuppance?

Perhaps because fans are sick of pre-packed dynasties, they are tired of throwing money at a franchise and expecting it to win. Had James done this differently, more quietly, less fanfare, less “my talents to South Beach,” less the smoke filled celebration on hydraulic lifts, less the predictions of “not one, not two, not three…” championships – then maybe, maybe, people would feel empathy for yet another defeat.

But you reap what you sow. James sowed a large target on his back, and now everyone is firing an arrow. Still, remember the Heat finished two wins from a title, ahead of all but one other NBA team, and did it without a real point guard, with a woefully short bench, and with a trio of superstars who, despite their individual talents, had never played a full season together before.

But the laughter you hear now echoes a lot of places, and it will be in the ears of the Heat players for the next 12 months. Don’t be surprised if the guys from Miami are as focused as the guys from Dallas were when the next championship run comes along.